Key West!  February 8, 2012
In the past week, we've stayed with friends in Orlando, stopped off at Ft. Pierce and visited the SEAL Museum.  We wanted to go there in order to see the brick I had purchased for Dan at the annual 'muster' in 2011 (see the picture). 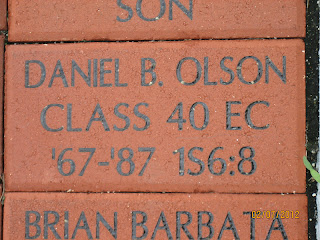 
Yesterday, we didn't make it through Miami before rush hour - yikes!  Imagine Chicago or Los Angeles or Atlanta - not fun.  We stopped for the night in a truck lot by the restaurant where we had dinner, just south of Miami!  Tired, not interested in anything but some shut-eye.
Today, we got an early start, and arrived in Key West around lunch time.  We had to register at the base, get a pass for me, visit the commissary and the Navy Exchange for supplies and mail.
We ended up on the same spot as last year!  Tonight, there was a pot luck in the camp area, and we met some people and became reacquainted with folks from last year.  Most importantly, I made an appointment for a haircut tomorrow!!  My hair is out of control, especially with the humid conditions and some wind - I look a bit like the wild woman of Borneo!
We haven't seen any sites yet; our temporary life in Key West starts tomorrow, now that we're situated in the camp area.

More adventures to come!
Posted by Gena Olson at 4:47 PM