Had the second of four sailing lessons this morning.  He put us each into a Sunfish (small) sailboat with a small sail.  We were to just sail out and back, first in a circle in the little bay, then in figure eights.  I did ok, had a little problem where the mainsail sheet (control rope) was caught on cleat and kept me from being able to control it.  Once I figured that out, I did much better.  Then, with the instructor's help, I managed to get to the dock.  I had one foot on the dock and one in the boat, trying to remove the center board....well, you shouldn't do that!   The boat, of course, started moving away, I did a slow splits until I realized that I had to go in the water.   Two pieces of good news from the dipping:  one, the water actually felt great after three hours of sailing; two, there was no one around with a video camera (that was the first thing Dan asked me after his guffawing stopped!)!  I was fine, just swam (with my Mae West-type life preserver) to the sand.
Later, after shower and rest, I went on my bike to a little Cuban market, Fausto's.  Turns out they are right across the street from the best ice cream place on Key West - homemade ice cream!  So, I had my dessert around 4:00.  Returned 'home' around 5:00 to Happy Hour with my neighbors - about 10 of us sitting around.  They were mostly comparing insurance plans for their big rigs or talking about camping places they frequent.  I was happy to be included though - nice people. 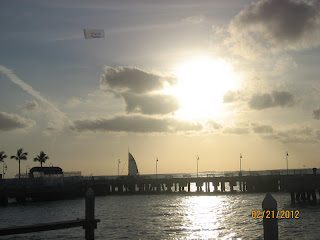 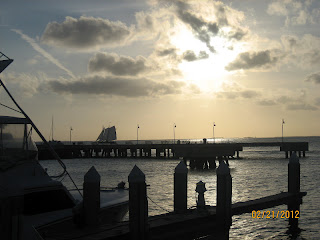