Thursday, Oct. 14
Well, we've been in Seattle for a few days, and I've been having too much fun to write!  We're back at Ft. Lewis for the night, a little maintenance, one more load of wash.  Tomorrow, we're driving up US-101 onto the Olympic Peninsula.
In Seattle, we stayed in a very nice time share, courtesy of Dan's daughter.  She also went all out as a host in her adopted city:  bus passes, maps, tourist attraction information, bus website for wonderful navigation of the city, personal guided tours!  We had some nice dinners and conversation.
Impressions/memories of Seattle:
really easy to get around - bus, train, monorail
Many of the young people have that Seattle grundge (sp?) look down pat!
Great city to people watch -
Seems to me that, in general, Seattl'ans are into dressing for comfort, walking, biking, healthy living - really love their city, enjoy all its neighborhoods and features.
One day, waiting for Dan, there was a guy on crosscountry skis going up and down the sidewalk - he did have a camera crew with him, advertising for a resort nearby - what a hoot!
Pike Place Market is so full of atmosphere, and anything you can imagine to buy.  The flying fish place is fun
City is really clean, all the public places, even the alleys.  With all the nice misty rain (not while we were there) everything is very green.
The Ballard Locks were fun - watched 2 boats go through. There's also a fish ladder there, where the fish think it is normal rapids, but we can watch them, through a window, as they gather themselves for a try up to the next level.  Facinating!
Enjoyed going up in the Space Needle (520 ft.) twice - once at night, once in the day. Amazing views both times.
Pioneer Square, some of the oldest buildings in the area - really has character.
Went into a man skirt store there - Michelle said many Seattle men wear skirts - but, I didn't see any at all.  I did get some pictures of the mannekins in the store - wow.  Dan said he would never mess with any man in a skirt, 'cause he'd have to be the baddest guy around!
We went on a duck boat tour - on land, then on the water.  Funny guy (driver)- several pictures of him in his various hats.  He was also very nice - our tour went on longer than scheduled because of traffic - he found a place where some of the ladies could go to the bathroom
Starbucks EVERYWHERE, as were Seattle's Best and other coffee outlets.  Went in the first Starbucks ever.
Everywhere also were people on bikes - up some serious hills, on the ferry, buses.
For two of the days we were there, we could see both Mt. Baker and Mt. Ranier - we're told you can only see them for about 50 days of the year!
Our favorite place to eat:  Pasta Fresca.  No menu - you are seated, asked if there's anything you WON'T eat, then served wine, and 5 courses, depending on what Mike thought you should have.  Dan got several dishes different from what I was presented - and, he liked his better, I liked mine better!  Amazing!  and delicious.  We were told it would take 2-1/2 hours for dinner - it did!
One city bus driver took an amazing amount of time to help two old ladies with their shopping carts, getting them secured in the bus.  Wow - what kindness. They guy next to me said "That's a Christian driver!"  And, I believe she probably was.
We took a ferry to Bainbridge Island, with all the commuters who live there and work in Seattle.  Huge ferries, very comfortable and quiet.  People doing anything from reading, playing cards, listening to music, sleeping (on padded benches or on the floor), and doing yoga.  I could commute like that!  We thought we had more time on the island, but, just as I was getting my Italian soda, we heard "Last call for the 6:30 ferry!"  So, this bod that doesn't run had to run about 3 city blocks to make it.  Phew!
Enjoy the pictures! 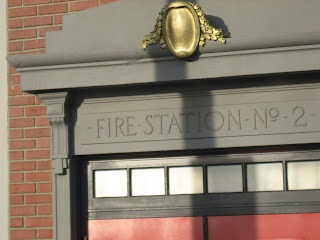 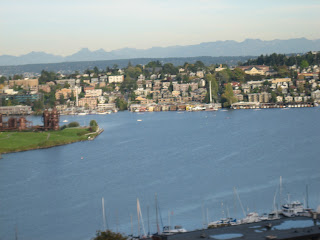 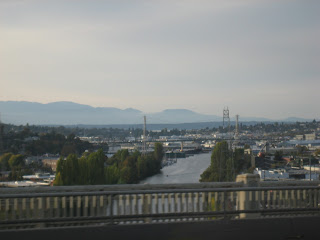