Tuesday, October 19, 2010
One thing we noticed here in Oregon, as opposed to Washington, the clear cutting of the forrests (which I have been assured is good for the forest and land) still is done, but they leave about 50 yards on either side of the highway - you can see through that band, but it certainly looks much better!
We drove through the rest of Oregon and into California, camped in Eureka near the Avenue of the Giants (redwoods).  All along the Oregon coast, there were so many heart-stopping, breathtaking views, I can't begin to categorize or capture them.  We have a schedule to keep, so couldn't stop as often as we would have liked.  We did stop a few times, took a few pictures, and enjoyed the drive (well, Dan drove, I rode).
We saw some bicyclists on the road - amazing.  In Oregon, we saw a couple of bridges and a tunnel, where the bicyclist is to press a button upon entering to activate a warning blinker for vehicle drivers.  Pretty cool.  But, with the 2 lane road being, in some places, barely wide enough for cars, it seems terrifying to me for those bicycle riders!
Once in California, one road sign was a little different:  they still say "Tsunami Warning Zone" with a picture of a big wave, but there's no little cartoon guy scrambling up a hill to escape!  What's that about??
We've begun to see some huge redwoods, but they're only a fraction of the size of the really big ones!  I can't wait to see them tomorrow.
Big day tomorrow, gotta go! 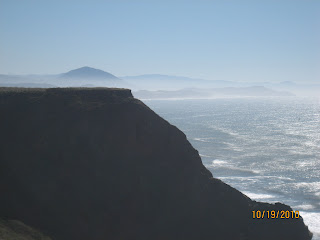 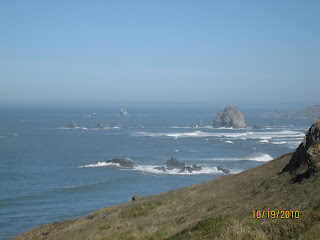 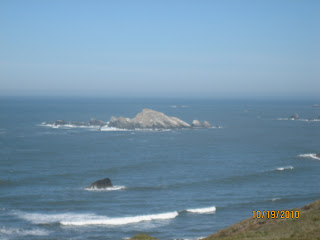 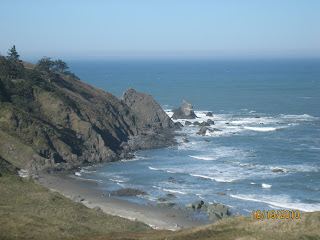 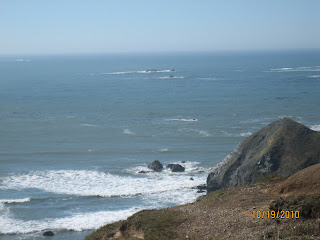 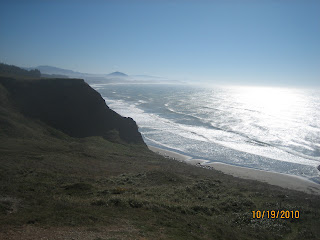