At the very end of the Erie Canal, there are several bridges which are low enough to keep many of our looper friends from completing the western portion.  We were able to do the entire length because of our foldable arch, which brings us under the 15 foot bridge heights.  North Tonawanda is only a few miles from Lockport, and is where the Erie Canal empties into the Niagara River.  Turning right and going down the river isn’t really an option, because of a little feature called Niagara Falls!
We pulled into Smith Boys, and tied up on their outside dock.  Dan had quite a bit of maintenance catch-up he wanted to do, and I wanted to go home for a family fix!  My sister was coming for a visit from Colorado, so I wanted to be there.  Also, I was so ready to have some quality time with my son, Travis, and his family.
Dan and I talked every day about what he was doing, what we were doing at home, and I really missed him.  But, it was a time that I really needed!
Back to when we first arrived:  We got the boat settled and secure, then went on our bicycles looking for something to eat.  We saw a place close by called “Betty’s”, which had a picture of Betty Boop (cartoon character) and a sign that said “Best Roast Beef in the Two Cities”.  The two cities would be North Tonawanda and Tonawanda.  We decided to give it a try.  Well, of course, we haven’t sampled any other roast beef in that area, but I venture to say it would not be the best of anywhere.  What they had done was buy roast beef sliced for sandwiches, put it into a crock pot, added water and let it cook all day (beyond the done stage at which they had bought it).  Now, with the water added, they could say they have “au jus”.  Oh my.  They put it on a ‘weck’ bun, which is a western New York thing, where they brush the top of a hamburger bun with butter and roll it in coarse sea salt and caraway seed.  We were underwhelmed.
Now, I have a word or two to say about the bar itself – run down place with run down looking men.  North Tonawanda was another down and not-quite-out town like we have been seeing.  Only North Tonawanda isn’t trying hard to attract tourists or boaters.  The people we met, as always, were friendly and nice.  I feel bad for folks who live in a town where there doesn’t seem to be any jobs or reason to live there….
Dan had a chance to explore the town during the 10 days I was gone – he got a haircut, found a grocery store, had a few meals out.  But, mostly, he worked on the boat.  He welcomed the opportunity to pull all the floor hatches up to expose the engines and etc. without worrying about my falling into the open hatches….which, sadly, I have already done twice.  Just call me “Grace”.
When I returned from Michigan, we used the rental car to run some errands, then took it back to the airport rental car place.  We got an Uber back to the boat.  Next day appeared to be a nice day, so we decided to go to Niagara Falls.  I have been there 2 or 3 times before, but Dan, the native Michigander, had never been there!  We got an Uber there (only about 8 miles), and thoroughly enjoyed the day.  We rode the “Maid of the Mist”, which wasn’t the experience I remembered – I remembered being absolutely deluged by tons of water, but this time we just got what amounted to a heavy rain.  Still fun, though.  Next, we went to the Cave of the Winds.  These days, you don’t actually go into the cave – it collapsed years ago.  But, you do get to walk on stairs and platforms right next to the water.  You can (but we chose not to) go on to the platform called “Hurricane” platform for a real drenching!  Pretty cool.  The Niagara Falls experience is really amazing – when we exited the 200 foot drop elevator to walk on the Cave of the Winds area, there was the most dramatic rainbow I’ve ever seen.  That, juxtaposed onto the Falls themselves was really extraordinary! 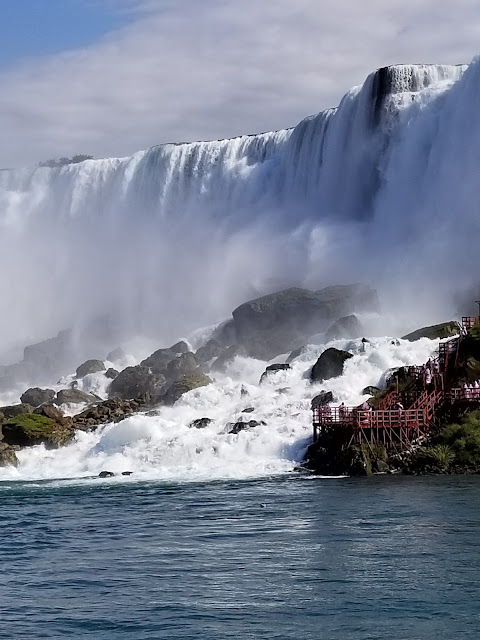 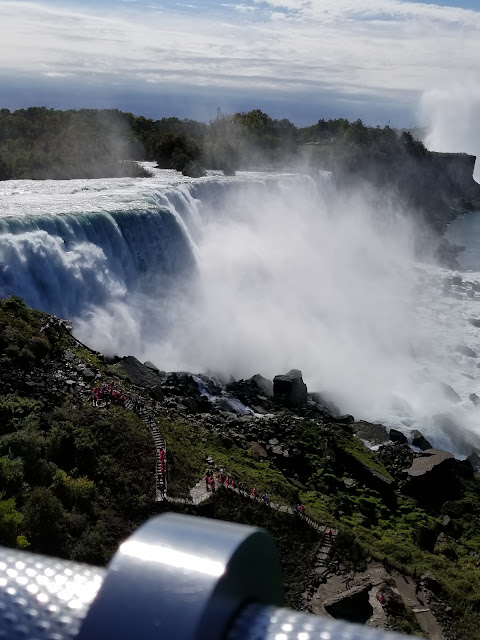 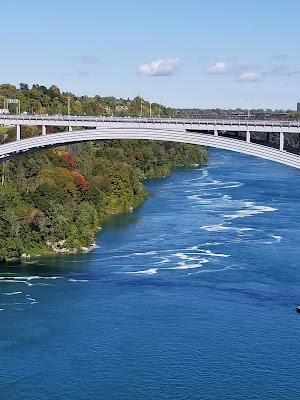