Tuesday, September 20 and Wednesday, Sept. 21, 2011
We arrived at the camp site in the Porcupine Mountains Wilderness State Park yesterday evening.  We are just yards from Lake Superior, amid woods that are full of color.
On the topic of "Small World", we talked to the couple parked at the next lot.  Turns out they live a few blocks from us in Royal Oak!  They are doing a tour of the UP in reverse from us:  they started on Mackinaw Island, went up to White Fish Point and around from the east.  So, they gave us some "must sees" for the rest of our trip, and we gave them some "must sees" that they will encounter as they return to the lower peninsula - cool!
The shore of Lake Superior, when we first saw it, was a reddish sand.  Farther west, where we are camped, it is totally flat, red, sandstone - big solid pieces, with layers that have broken away.  Later today, when we saw the Lake again, over by Presque Isle, it was sand with lots of lovely, rounded stones of all colors.  Amazing!
First we drove up to the Overlook for Lake in the Clouds.  Lovely, lovely!  Then, we decided to drive to the end of the park, by Presque Isle, where there are quite a few falls.  My favorite spot was on the suspension bridge over to the island - the patterns that the sand, water, and stones have made in the sandstone-bottomed river were truly amazing - perfect circles, looked like a series of hot tubs!
We had to leave the park and drive to Ontaganon for a while, so that Dan could connect to the internet and get his 2 hours of work done.  Later, we'll be back at the campsite, and I should be able to get some great
sunset pictures from the beach. 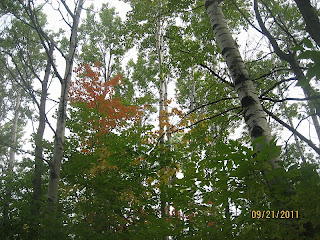 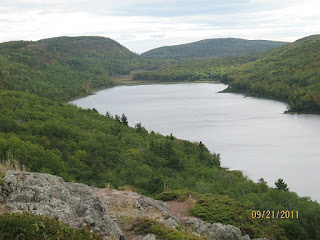 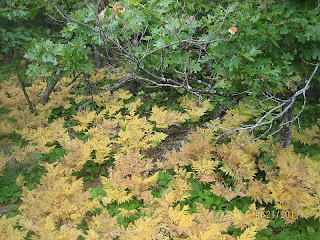 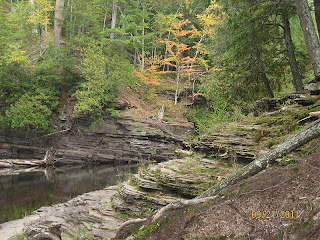 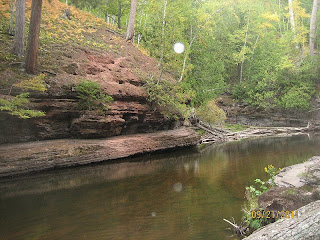