Saturday, Oct. 9, 2010
We left Glacier NP today.  But, we still had lots and lots of grandiose, majestic, wondrous mountains to view as we drove along.  Interestingly, as we turned west, back on US 2 after our South Dakota and Wyoming detour, the trees that covered the mountains all around us had the evergreens and aspens that we saw before, but added in throughout the fir trees were lovely larch trees (tamarack).  They are the only deciduous coniferous tree - means they change colors and drop their needles.  At this time of year, they are a lovely yellow.
We came to a town where we saw a traffic light - the first in a number of days!  We stopped for lunch (elk burgers), and read through the local paper.  One article told about a local 60-year-old man who had a dispute with a neighbor and then burned down his neighbor's outhouse and yurt shelter!  He's sitting in jail, waiting for trial.  There was also a list of crimes committed in the county recently: one man's dog defecated on someone's porch; there was a hit-and-run in the local shopping parking lot where someone's car was hit; two drunks caused a disturbance in their trailer when they were arguing about some cigarettes; two dogs were digging under a fence; a woman heard a dog bark and then saw someone running from her car; a young man started having a throwing fit when his mom wouldn't let him take the car....oh my, such a hotbed of crime - how do they live here??
We drove through the town called Columbia Falls, where there are no falls!
We drove through the rest of Montana, across Idaho, and have stopped for the night outside of Spokane, Washington - three states in one day!  We're both tired - the road twists and turns and rises and falls through mountains and streams.  Lovely, but tiring (especially for the driver).  Today and tomorrow will be mainly just driving, so that we arrive at Ft. Lewis, Washington by tomorrow night (Sunday).  Because Dan is a retired veteran, we can camp on military bases very cheaply.  We will leave the camper at Ft. Lewis, and drive the car to Seattle on Monday morning.  We'll be in Seattle until the 14th.  Dan's daughter, Michelle, lives there - I'm looking forward to meeting her! 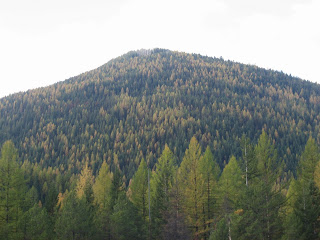 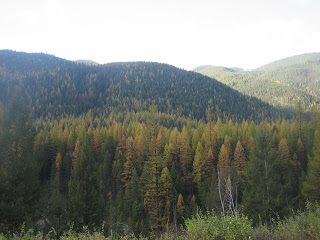 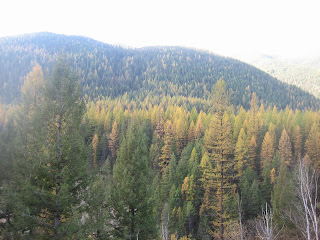