Thursday, October 28, 2010
Dan got some much needed work done in San Diego, but we've saved our touristy activities until our next trip.  We enjoyed spending time with Karen and Barry, had a couple of wonderful dinners, and I thoroughly enjoyed being right on the beach for a couple of days.
Leaving San Diego and the ocean :(   today.  Next time I see the ocean, it'll be in Florida.  This next segment of our trip won't be the meandering, take-it-as-it-comes travel that we've enjoyed so far.  We have 7 days to drive the 2500 miles to Ft. Pierce, Florida, so we have to average 350 miles each day: no staying an extra night here or there, no big detours, no simpler, more interesting 2 lane highways - just I-8and then I-10 across.  But, we've already begun planning our next road trip - the plan goes something like this:  drive like a bat out of you know where to get to this quadrant of the country.  Then, spend 6 weeks or so
really seeing the places and doing the things we really want to do.  Our list grows every day.  Among the places are:  Sedona, Ariz., Santa Fe, NM, Winslow, Ariz. (must stand on the corner!), and any place else that looks interesting on the way!
I'll post entries on the blog daily like I have been doing, but I suspect there won't be lots of pictures - just progress reports!
This morning we have been passing through some pretty impressive mountains or really big hills.  This terrain is different from anything I've ever seen.  For quite a few miles, it was rocks, upon rocks, upon rocks - big ones, too.  It was pretty impressive - Dan has seen it before, and he's still in awe of the sight!  The vegetation along the road (except for the rock section, has a beauty of its own - I love the colors:  rusty red, golds, beiges, brown, and a zillion shades of green.  And, the rocks!  Totally amazing.  Dan said when he sees something like this, he imagines the first settlers arriving with covered wagons and what they must have thought.  I.e. "Ethyl, what in the world are we doing here?!!!"  I imagine that, by this point, the covered wagons would be gone and the settlers would be walking beside their pack animals..
Now, we've gone into entirely different terrain, the low dessert (the rocks and high hills were the high desert).  Now instead of hills and rocks, we see flat land, sand,  small stones, and scrubby bushes that are really sparce - hard to start a forest fire out here.
We do see mountains in the distance, the "Chocolate Mountains".  Now this is what I imagined a desert would look like!
Then, we crossed a canal filled with water.  Turns out, the Colorado River never reaches the ocean, because a system of canals takes the water to San Diego and surrounding areas, plus irrigates some fields here in the desert.  In those fields, they get 5 cuttings of hay per year - in Michigan, with a more 'normal'climate, we can get 3 at most.  Also, they grow any number of types of vegetables - all because they have the water to irrigate.  The Salton Sea was created by a dyke that broke over 100 years ago.  It's a big lake (not by Michigan standards!), that is very salty and also polluted by the runoff from all the fields in the valley.  It's salty, because it's 274 feet below sea level, and there was a huge salt deposit and mine there.  Being a depression in the earth, it has held the water there, and
it just keeps getting saltier!  The only fish that live there are briny shrimp, and they'll probably be gone at some point.
Now we're passing an area with huge sand dunes.  There are lots and lots of motor homes/trailers with ATVs and dirt bikes riding all over the place.  Looks like a hoot!  They come out here for just that purpose - set up camp anywhere.  Dan used to bring his kids out here and he said you could hear the whine and racing of those engines from dawn until dark. What a paradise for ATV and dirt bike riders!
Suddenly, after seeing no regular settlements or towns for miles and miles, out in the middle of NOwhere, there was a huge casino, complete with palm trees!  Now, as we're approaching the Arizona border, there is a row of billboards! It's a bit of a shock to the system after all that wilderness.  Then, Yuma, AZ.  and our first problem on the road.  A nice man at the red light told us one of the straps that ties down my car to the dolly was loose or broken.  Turns out they were both broken!  So, we took a little detour to 'Wally World' and got replacement parts.  That Dan is amazingly handy!  Back on the road again!
We've decided to try reading a book together - stopped at Cracker Barrel for lunch (no sacrifice for either of us), and picked a book from their collection.  Should make these long straight miles fly!
We've stopped for the night at the junction of I-8 and I-10.  The book is a hit with both of us.  400 miles or so today, and more of the same tomorrow. 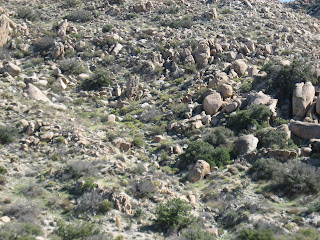 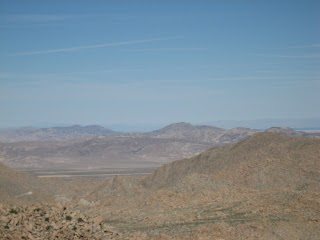 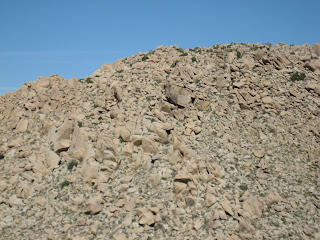 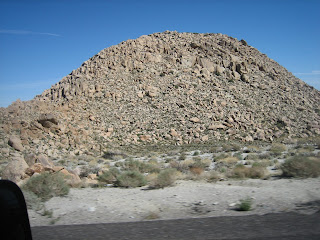 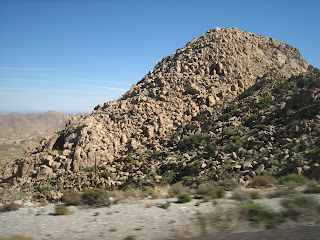