Thursday, November 4, 2010
Last night, we stayed in the driveway of Dan's friends, Denny and Denise, in Orlando, Florida.  Went out for a rib dinner, sat around and heard stories of the days while they were both Navy SEALs (acronym for sea, land, air).  We're going to be in Ft. Pierce, Florida starting tonight through Sunday, where the Navy UDT/SEAL museum is located.  The UDT  (stands for underwater demolition team) were the predecessors of the SEALs.  Meetings, ceremonies, gab sessions - I think I'll be hearing lots more stories!  These men are exceptional and I'm proud to know them.  They don't seem to tell their stories except to each other.  To other people, even other veterans, Dan was an electrician and Denny was a pipe fitter - true, but they were also SEALs.  They worked hard, more times than not in extremely dangerous circumstances, and they played hard - so far, those are the stories I've heard...the playing hard ones, I mean!  This weekend was the original reason for this whole trip - I'm looking forward to being the proverbial fly on the wall for the next few days.
Friday, Saturday, Sunday, November 5-7, 2010
I have met so many people in the last few days: men who served with Dan, and their wives; men who served on other SEAL or UDT teams in the past; brothers all - a group of ordinary-looking men, but who are exceptional in their dedication to their country, their abilities, their willingness to put it all on the line.  They come to these events, reunions, greet each other and regale each other with stories of their experiences and friends present and passed away.  Today (Sunday) the weekend was climaxed with two events.  First, at sunrise, eight men, just deceased this year, who had been SEALs or UDT members and had requested such, had their ashes returned to the sea.  Each of eight current SEALs took one bag of ashes, and solemnly backed into the sea, swam out through the surf, emptied the bags of the ashes, and then returned to the beach together just as the sun was coming up.  Magical and meaningful time.  Bagpipes seem to be a part of all Navy ceremonies that I have witnessed, and one was played this morning too.  Prayers, heart-felt and brief speeches.  Second, the UDT/SEAL Memorial was dedicated.  It is a lovely, elegantly simple memorial, which includes a marble wall with 252 names of men who died while serving their country in a UDT or SEAL unit.  This list includes 15 names who have been added in very recent years.  Our country is still producing young men of this caliber who still do their duty proudly all over the world!  Praise God! 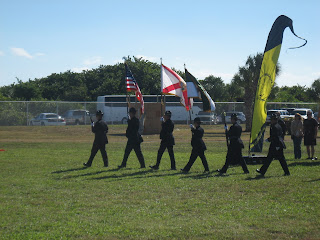 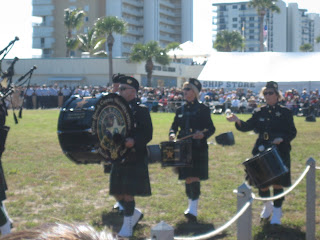 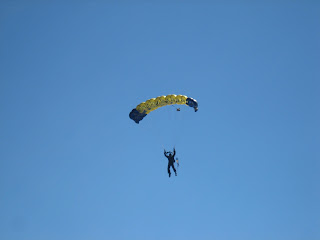 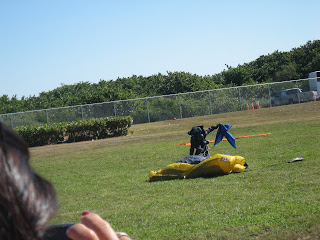 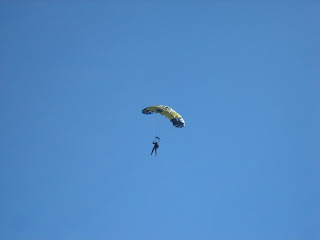 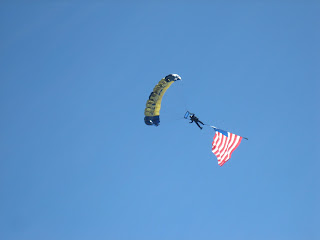 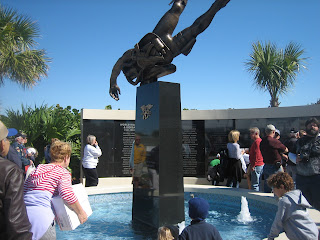 Spent last night in Dennie and Denise's driveway again - other friends came over, and we had a time, laughing and telling stories.  Next stop is Laura's house - can't wait to get my hands on those boys!  I hear Rylan (age 5-1/2) can now ride his bike without training wheels!  Will be at their house for a couple of days - picutures of the cuties will ensue!
Posted by Gena Olson at 6:18 PM